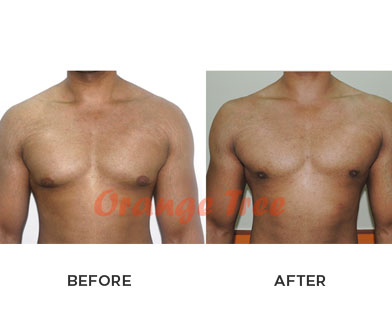 Our chief cosmetic surgeon at Orange Tree had an unusual experience when a middle aged gentleman walked into his chamber with his 17 year old son. Father was visibly worried about his son who recently has been staying isolated at home and would keep his room locked most of the time. The young boy was very worried about his enlarged breast gland which he has noticed for the last 2 years. Father was equally worried as his son was slipping into depression and his studies were getting affected. But this is not a standalone case of enlarged breast gland in males at a young age.

Male breast enlargement gland is also commonly referred as Gynaecomastia and its one of the commonest cosmetic surgery procedures in young males. The cause of the enlargement of the breast gland can be attributed to various reasons, but the commonest cause is idiopathic which simply means that breast gland enlargement without any underlying cause. The other causes are hormonal, drug intake, medical disease, and others.

The grading of gynecomastia is based on the size of the enlargement of the breast and the associated glandular component. Obese boys will commonly have enlarged male breast gland and in such cases fat component is much more than the gland.

What are the factors that bring a boy or adult to the clinic?

The best technique in cosmetic surgery is a combination of liposuction and breast gland excision through a tiny cut. The patient goes through a detailed evaluation including a psychiatry and endocrine evaluation if needed. Our best gynecomastia surgeon in Manipur,Kolkata and Delhi explains the male breast reduction surgery procedure in detail.

The gynaecomastia surgery is generally done as a day care case and the patient is discharged the same day evening. The procedure can be either done under local anaesthesia or general anaesthesia depending on the grade of enlargement and patient's choice.

Liposuction is done through a tiny cut at the lower end of the breast swelling. After the fat has been removed, the rest of the breast gland is removed through a small cut at the areolar margin. Sometime a drain needs to be kept to remove the fluid in the cavity. Due to the nature of the procedure, the patient can be easily relieved the same day. The pain is not a concern in such procedures and the patient can easily resume his normal activity after 2-3days of the gynaecomastia surgery in Delhi. A compression garment may be asvised by our specialist practioner for around 2months.

Can I get the surgery done at 14 years of age?

Male breast gland nodule forms starts at adolescence and generally it resolves by adulthood. So the gynaecomastia surgery is generally performed after 17-18 yrs of age when gland formation is complete.

Does the surgery leave any scar marks?

The tiny cut used in the surgery is hardly visible and the scar fades with time and its hardly a concern after sometime.

Why pressure garment is needed

The removal of fat and gland inthe male breast surgical correction creates an empty space between the skin and the muscle. The garment helps to eliminate it and also help the overlying skin to reshape better.

Will the gland come back again?

Once the breast gland is removed it will never grow back.